Goals of the Amendment 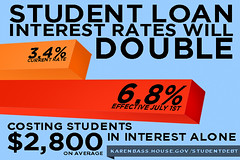 Sign up for email alerts from Rep. Karen Bass.

Background: Subsidized loans are available to students based on family income, and the interest does not begin to accrue until the student graduates.  These subsidized loans will account for about one quarter of all federal student loans next year, with a net annual loan volume of $30 billion.  The government will provide twice as much in unsubsidized Stafford loans – available to all students regardless of family income – on which interest begins to accrue immediately at a fixed rate of 6.8 percent.

How the Amendment is Paid for