WASHINGTON – Tomorrow, in observance of World AIDS Day, U.S. Rep. Karen Bass will participate in a 24-hour “tweet-blast” to engage and inform the public about the effects of the HIV/AIDS epidemic around the world. Every hour throughout the day, Bass will tweet useful facts about HIV and AIDS, and communicate ways people can become involved in the fight to end HIV and AIDS in their communities. 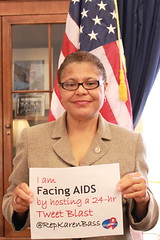 “Raising awareness about the HIV/AIDS epidemic is vitally important to ending the disease in our nation and abroad,” said Rep. Bass. “My hope is that World AIDS Day activities taking place around the world will serve as a springboard to continue the global movement that will ultimately halt the spread of HIV. While we commemorate World AIDS Day on December 1, we must consider every day World AIDS Day until we put an end to this global epidemic.”

In addition, social media users can offer their own suggestions about their personal ideas or efforts toward ending the disease on a local level. Users interested in participating in the World AIDS Day tweet-blast with Rep. Bass can participate by commenting on Rep. Bass’ Facebook page and following her on Twitter @RepKarenBass.